Olympic qualification, meet records and a new U23 Hungarian record in Tatabánya 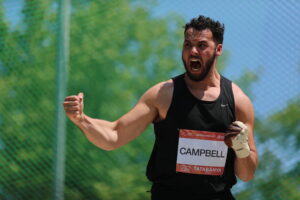 The first stop of the Hungarian Grand Prix series in Tatabánya started with the men’s hammer throw at noon on Saturday. Taylor Campbell’s win kicked off the competition (78.23) and the British athlete has booked his place for the Olympics with his throw. Mykhaylo Kokhan, who is ninth on the world rankings, finished second with 77.00 metres. Dániel Rába (73.64), who is fighting for a place in the Olympics, finished third, Bence Pásztor (73.05 SB) finished fifth, while Krisztián Pars (70.63) was sixth. 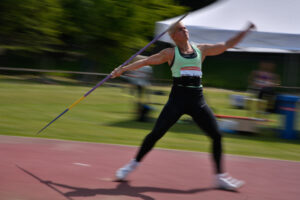 Réka Szilágyi became the first Hungarian winner after she prevailed in the javelin throw with her 59.66 metre last attempt beating Jasiunaite Livetá (59.06) and compatriot Angéla Moravcsik (58.93 SB). Réka and Angéla both aim to qualify for the Olympics – the former was 31st and the latter was 47th on the world rankings before the competition. 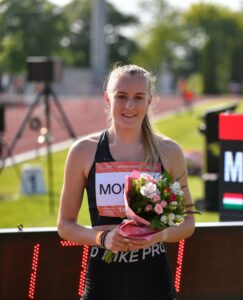 Some world class athletes featured in the men’s 100 metres. American World Champion of the 4X100 metres Michael Rodgers (10.38) took the first hear beating Richard Kilty (10.44) and Hassan Taftian (10.50), while Dominik Illovszky advanced to the finals as well. Emannuel Matadi won the second heat, Alonso Edward was second (10.25), Andrew Roberston (10.25) was third while Hungarian Tamás Máté (10.50) came in fourth to advance to the finals. 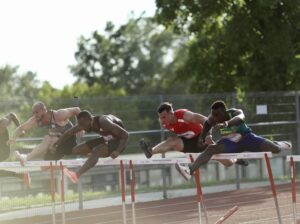 One of the most anticipated events of the day was the men’s 100 metres, which ended with Emmanuel Matadi’s (10.18) victory. The Liberian sprinter beat Alonso Edward (10.20) and Michael Rodgers (10.25) for the gold. 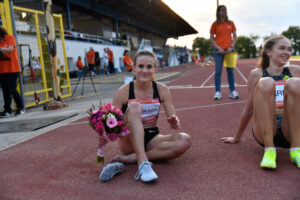 The crowd witnessed a meet record in the men’s high jump when Malaysian Nauraj Singh leaped over 2.27 metres which earned him the gold medal.  Cypriot Vasilios Konstantinous (2.23) finished second while Polish Sylwester Bednarek (2.20) earned bronze. Dániel Jánkovics finished fourth, Péter Bakosi fifth and Péter Agárdi sixth, all of them with a result of 2.17.

The last two events were the 4X100 metres relays. The Kéri, Csóti, Takács, Sorok quartet won the women’s race while the team of Illovszky, Máté, Szabó, Kádasi prevailed in the men’s competition.

–  I am very pleased. This competition proved that the Hungarian Grand Prix series has a reason to exist. The atmosphere was great and many meet records were broken during the event. Janka Molnár’s U23 national record was especially great to see. I also have to mention that we saw an outstanding result by international standards when Taylor Campbell qualified for the Olympics in the hammer throw with a huge personal record (78.23) – said Péter Deutsch chairman of the competition’s organizing committee.